European settlers came to the area near present-day Plano in the early 1840s.[5] Facilities such as a sawmill, a gristmill, and a store soon brought more people to the area. A mail service was established, and after rejecting several names for the nascent town (including naming it in honor of then-President Millard Fillmore),[6] residents suggested the name Plano (from the Spanish word for "flat") in reference to the local terrain, unvaried and devoid of any trees. The post office accepted the name.[6]

In 1872, the completion of the Houston and Central Texas Railway helped Plano grow, and it was incorporated in 1873.[6] By 1874, the population had grown to more than 500.[5] In 1881, a fire raged through the business district, destroying most of the buildings.[5][6] Plano was rebuilt and business again flourished through the 1880s. Also in 1881, the city assumed responsibility for what would eventually become Plano Independent School District (PISD), ending the days of it being served only by private schools.[5]

At first, Plano's population grew slowly, reaching 1,304 in 1900 and 3,695 in 1960.[5] By 1970, Plano began to feel some of the boom its neighbors had experienced after World War II. A series of public works projects and a change in taxes that removed the farming community from the town helped increase the population. In 1970, the population reached 17,872,[5] and by 1980, it had exploded to 72,000.[5] Sewers, schools, and street development kept pace with this massive increase, largely because of Plano's flat topography, grid layout, and planning initiatives.

During the 1980s, many large corporations moved their headquarters to Plano, including J. C. Penney and Frito-Lay, spurring further growth. By 1990, the population reached 128,713,[5] dwarfing the county seat, McKinney. In 1994, Plano was recognized as an All-America City.[7] By 2000, the population grew to 222,030,[5] making it one of Dallas's largest suburbs. Plano is surrounded by other municipalities and so cannot expand in area, and there is little undeveloped land remaining within the city limits. But as of July 2012, one large tract of land was being developed: Turnpike Commons[8] at the intersection of Renner Road and the George Bush Turnpike (also bordered by Shiloh Road to the east). The development is expected to feature apartments, medical facilities, restaurants, a Race Trac gas station, and a hotel.

In 2013, Plano received a top score in a national livability index according to an algorithm created by AreaVibes.com, a Toronto-based company specializing in such data.[9] AreaVibes ranked Plano at the top of the list of U.S. cities with populations between 100,000 and 10 million. Another chart, "Best Places to Live in 2013", also ranked Plano first.[10]

Map of racial distribution in Plano, 2010 U.S. Census. Each dot is 25 people: White, Black, Asian, Hispanic or Other (yellow)

See also: History of Chinese Americans in Dallas–Fort Worth

Along with Houston, Plano has one of Texas's two major concentrations of Chinese Americans.[19] According to the 2010 U.S. Census there were 14,500 ethnic Chinese in Plano. Of cities with 250,000 or more residents, Plano has the sixth-largest percentage of ethnic Chinese, making up 5.2% of the city's population. Charlie Yue, the executive vice president of the Association of Chinese Professionals, estimated that about 30,000 Plano residents are Chinese and that many "don't participate in government activities, like the census".[20]

Chinese professionals began to settle Plano by 1991.[21] As of 2011 the Chinese restaurants in DFW catering to ethnic Chinese are mainly in Plano and Richardson.[22] Most of the DFW-area Chinese cultural organizations are headquartered in Plano and Richardson. Plano has six Chinese churches[20] and supermarkets including 99 Ranch Market and zTao Marketplace.[23]

According to the Plano Economic Development 2017 Leading Employers Report,[25] Plano's top 10 employers are:

About 80% of Plano's visitors are business travelers, due to its close proximity to Dallas and the many corporations headquartered in Plano. The city also has a convention center owned and operated by the city. Plano has made a concerted effort to draw retail to its downtown area and the Legacy West in an effort to boost sales tax returns. It has two malls, The Shops at Willow Bend and The Shops at Legacy. Collin Creek Mall closed in 2019. There is an area that has apartments, shops, and restaurants constructed with the New Urbanism philosophy.[26] An experimental luxury Walmart Supercenter is at Park Boulevard and the Dallas North Tollway.[27]

Some of the country's largest and most recognized companies are headquartered in Plano. Legacy Drive in ZIP Code 75024, between Preston Road and Dallas North Tollway, has many corporate campuses. The following companies have corporate headquarters (Fortune 1000 headquarters) or major regional offices in Plano:[28]

In 2014 Toyota Motor North America announced its U.S. headquarters will move from Torrance, California, to Plano.[33] In 2015, Liberty Mutual announced its plans to build a new corporate campus just a few blocks east of Toyota's, bringing an estimated 5,000 jobs to the community.[34] In January 2016, JP Morgan Chase and mortgage giant Fannie Mae announced they would move their regional operations to Plano, bringing a combined 7,000 new jobs to the community.[35]

Dickens in Downtown Plano 2014 Lighting of the Tree

Although Plano is named for the flat plains of the area, large trees abound in the city's many parks.[37] One such tree, estimated to be over 200 years old, is in Bob Woodruff Park, near Rowlett Creek on the city's east side.[38]

The City of Plano also owns and operates four performing arts venues and a conference center under the auspices of the Parks and Recreation Department: the Courtyard Theater, the Cox Playhouse, the Amphitheater at Oak Point Park, McCall Plaza, and the Oak Point Park Nature and Retreat Center.

The Municipal Center in October 2015

Plano has a council-manager form of government, with a part-time city council that sets city policy and a city manager responsible for city operations. The Plano City Council has eight members elected on a nonpartisan basis in staggered odd-year elections every other May. Council members and the mayor are elected by and serve the city at large. Council members serving in places one, two, three, and four must reside in that district, and the mayor always serves in place six. The mayor receives a yearly stipend of $8,400, and each council member receives $6,000.

On December 8, 2014, the city council passed an amendment to its civil rights act to include sexual orientation and gender identity as protected.[48]

Plano is a voluntary member of the North Central Texas Council of Governments association, the purpose of which is to coordinate individual and collective local governments and facilitate regional solutions, eliminate unnecessary duplication, and enable joint decisions.

Dallas's wealthy northern suburbs were solidly Republican and in 2005, the Bay Area Center for Voting Research ranked Plano, the largest of them, the United States' fifth-most conservative city.[50] It has become more competitive in national elections as its population has diversified, shifting toward the Democratic Party since 2016, when Donald Trump won the city by a narrow margin. In 2018, Beto O'Rourke became the first Democrat to win the city in a statewide election in the 21st century, and in 2020, Joe Biden won the city by an even larger margin. But in local and state elections, Plano still leans Republican, voting to reelect Governor Greg Abbott in 2018 and narrowly reelecting Republicans to the Texas House of Representatives and Texas Senate in 2018 and 2020.

2020 US Presidential Election precinct results by margin of victory

In 2014, Plano's City Council passed an expansion of the city's Equal Rights Policy that included anti-discrimination protections for gay, lesbian, and transgender individuals.[53] The ordinance drew the ire of conservative groups such as the Liberty Institute, which argued that it infringed on business owners' religious rights.[54] Many civil rights organizations were not supportive either, such as the Human Rights Campaign, which argued that the policy's exclusion of transgender individuals rendered the ordinance not worth defending.[55]

Plano is split between the 66th and 67th Districts in the Texas House of Representatives, and is wholly contained in Texas Senate District 8. 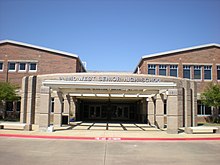 Plano has given $1.2 billion in property tax revenue to other school districts through the Texas "Robin Hood" law, which requires school districts that are designated as affluent to give a percentage of their property tax revenue to other districts outside of the county.[60] In 2008, PISD gave $86 million. Controversy erupted when the salaries of teachers in less affluent districts—such as Garland ISD—exceeded the salaries of teachers in districts that had to pay into "Robin Hood".[61]

In the 2013–14 school year, Plano ISD has opened two 4-year high school Academies, one focusing on STEAM (STEM education plus Media Arts) called Plano ISD Academy High School, and the other on health science. Additionally, the district has modified its existing International Baccalaureate program to allow freshman and sophomores in the program to be housed at Plano East Senior High School.[62] 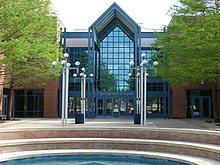 Entrance to the Spring Creek campus of Collin College in Plano, Texas

Plano is the home to two campuses of Collin College, one at the Courtyard Center on Preston Park Boulevard and the larger Spring Creek Campus on Spring Creek Parkway at Jupiter.[64] DBU North, a satellite campus of Dallas Baptist University, is in west Plano, and offers undergraduate and graduate courses and houses the admissions and academic counseling offices.[65]

A DART Red Line train at the Downtown Plano station

Plano is one of 12 suburbs of Dallas that opt into the Dallas Area Rapid Transit (DART) public transportation system. During most of its membership in DART, Plano was lightly served by bus lines, but in 2002, the Red Line of the DART Light Rail project opened stations in Downtown Plano and at Parker Road, which provide access to commuters traveling to work elsewhere in the Dallas area. The Orange Line traverses the same route for selected weekday/peak hour trips. The Silver Line is also planned to run through Southern Plano. Approximately 1% of the city's population uses DART. The Parker Road station charged for parking for non-member city residents from April 2, 2012 – April 3, 2014 as a part of the Fair Share Parking initiative. Two DART park-and-ride bus facilities, separate from the rail lines, are within Plano: Jack Hatchell Transit Center and Northwest Plano Park & Ride.

Plano was the first city in Collin County to adopt a master plan for its road system. The use of multi-lane, divided highways for all major roads allows for higher speed limits, generally 40 mph (64 km/h), but sometimes up to 55 mph (89 km/h) on the northern section of Preston Road. Plano is served directly by several major roadways and freeways. Central Plano is bordered to the east by U.S. Highway 75, the west by Dallas North Tollway, the south by President George Bush Turnpike (Texas State Highway 190 (east of Coit Road)), and the north by Sam Rayburn Tollway (Texas State Highway 121). Preston Road (Texas State Highway 289) is a major thoroughfare that runs through the city. Plano is the largest city in Texas without an Interstate Highway.

Plano opened a new interchange at Parker Rd. and U.S. 75 in December 2010. The single-point interchange is the first of its kind in Texas. The design is intended to reduce severe congestion at this interchange. According to reports traffic congestion has been reduced 50-75%.

Plano is roughly 30 miles northeast of Dallas/Fort Worth International Airport; it is the primary airport serving Plano residents and visitors.

The Plano Fire-Rescue has 386 full-time firefighters[66] who operate out of 13 stations.

In 2010 and 2011, Forbes.com ranked Plano the "Safest City in America" for cities with populations over 250,000.[69] Plano is consistently recognized and awarded by the National Association of Town Watch (National Night Out Awards),[70] the National Sheriff's Association, and the U.S. Department of Justice for "Excellence in Neighborhood Watch".

Plano's sister city also was Brampton, Canada, however the relationship ended in 2018.[115]

See also: Bibliography of the history of Plano, Texas