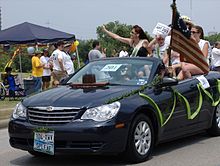 Texas NORML is a chapter of the National Organization for the Reform of Marijuana Laws (NORML) based in Austin, Texas. Jax Finkel serves as the organization's executive director.[1][2]

The organization is registered in Texas[3] and is federally recognized as a trans-partisan, educational 501c4 nonprofit. Texas NORML's mission is to change marijuana laws so that it reflects the majority opinion of Texans which is that the responsible use of cannabis by adults and patients should no longer be subject to penalty. Their focus is to increase public awareness of current laws regarding cannabis, as well as the legislative system and legislation regarding cannabis consumers in Texas.[4]

During the early 2000s, NFL offensive lineman Mark Stepnoski (of the Dallas Cowboys and Houston Oilers) served as president shortly after retiring from football.[5][6]