Repetition of one expression as part of another one
This article is about quoting text and speech. For information about the punctuation mark, see Quotation mark. For economic usage, see Financial quote. For other uses, see Quotation (disambiguation).

A quotation is the repetition of a sentence, phrase, or passage from speech or text that someone has said or written.[1] In oral speech, it is the representation of an utterance (i.e. of something that a speaker actually said) that is introduced by a quotative marker, such as a verb of saying. For example: John said: "I saw Mary today". Quotations in oral speech are also signaled by special prosody in addition to quotative markers. In written text, quotations are signaled by quotation marks.[2] Quotations are also used to present well-known statement parts that are explicitly attributed by citation to their original source; such statements are marked with (punctuated with) quotation marks.

Quotations are often used as a literary device to represent someone's point of view. They are also widely used in spoken language when an interlocutor wishes to present a proposition that they have come to know via hearsay.

As a literary device

A quotation can also refer to the repeated use of units of any other form of expression, especially parts of artistic works: elements of a painting, scenes from a movie or sections from a musical composition.

Quotations are used for a variety of reasons: to illuminate the meaning or to support the arguments of the work in which it is being quoted, to provide direct information about the work being quoted (whether in order to discuss it, positively or negatively), to pay homage to the original work or author, to make the user of the quotation seem well-read, and/or to comply with copyright law.[3] Quotations are also commonly printed as a means of inspiration and to invoke philosophical thoughts from the reader. Pragmatically speaking, quotations can also be used as language games (in the Wittgensteinian sense of the term) to manipulate social order and the structure of society.[4][5]

Quotative inversion occurs in sentences where the direct quotation can occur before a verb of saying or after a verb of saying. It can trigger inversion of the verb and the verb's subject. Subject-verb inversion occurs most often in written works, being rare in speech.[11] Quotations may appear before the inverted verb, but can also appear after the subject,[12] such as: "I am going to follow you all the rest of my life," declared the man [12] and Said the woman: "I see you with both my eyes."[12]

In syntactic terms, these direct quotations can be presented in two forms. The first is as the complement of a quotative verb (e.g. Marie said: "My brother has arrived"), and the second being as a head clause with a quotative adjunct (e.g. "My brother has arrived", Marie announces).[2] The verb phrase can be further expanded to include a complement, such as: "They'll never make it!" cried John to Mary. Subjects must precede the complement, otherwise the structure formed will be ungrammatical (e.g. *"They'll never make it!" cried to Mary John).[11] Quotative inversion is only allowed when the verb is in the simple present or the simple past. The most common pairing is the verb said with a nominal subject, such as: "That's the whole trouble," said Gwen.[13] Additionally, noun phrases are not permitted in addition to the subject when inversion takes place.[11] They are allowed only when there is no subject-verb inversion, or when part of a preposition phrase.[12]

In English, both verb-subject and subject-verb word orders are permitted:

This however, is not the case in all languages. For example, in Peninsular Spanish, this inversion is not allowed. Quotatives must follow verb-subject order:

Both direct and indirect quotations in spoken discourse are not intended to be verbatim reproductions of an utterance that has been produced. Instead, direct quotations convey the approximative meaning of such an utterance along with the way in which that utterance was produced. From a sociolinguistic perspective, a direct quotation in spoken discourse can therefore also be defined as “a performance whereby speakers re-enact previous behaviour (speech/thought/sound/voice effect and gesture) while assuming the dramatic role of the original source of this reported behaviour”.[17] Indirect quotations are simply paraphrases of something that a reporting speaker heard.[18]

Quotations are employed in spoken discourse for many reasons. They are often used by speakers to depict stories and events that have occurred in the past to other interlocutors. The speaker does not necessarily have to have been an original participant in the story or event. Therefore, they can quote something that they did not hear firsthand. Quotations are also used to express thoughts that have never been uttered aloud prior to being quoted. For example, while telling a story, a speaker quotes inner thoughts that they had during a specific situation. Finally, speakers use quotations to propose future dialogue for participants in a situation that may take place in the future. For example, two friends talk about their 10-year high school reunion that will take place in the future and propose what they would say. While future dialogue can be proposed for a situation that will likely happen, it can also be based on a situation that will not actually take place. In the latter usage, the proposed dialogue only exists in the conversational context.[19]

The quoted material is usually not a verbatim replication of an utterance that someone originally said. Instead, quotations in spoken discourse reproduce what a speaker wishes to communicate to their recipients; quotations demonstrate something that someone said, the manner in which that person said it, and the current speaker’s feelings about what was said.[19][16] In this way, quotations are an especially effective storytelling device; the speaker is able to give a voice to the protagonists in their stories themselves, which allows the speaker’s audience to experience the situation in the way that the speaker themselves experienced it.[17]

Verbs of saying (known as quotative verbs when used to introduce quotations) and quotative particles are used as quotative markers, which signal quotations in utterances.[18] Quotative evidentials are also used in some languages to indicate quoted speech (e.g. Cusco Quechua spoken in Peru, Nanti spoken in lowland southeastern Peru, Laal spoken in Chad).[20][21][22]

Quotative markers are used to mark a section of an utterance as quoted speech (i.e. a quotation). In oral speech, quotative markers act as quotation marks and often include a verb of saying (e.g. say). A quotative marker usually appears either before or after the reported speech or thought, depending on the syntax of the language.[18] For example, compare the following languages:

In American English, verbs such as be like, go, and be all are non-standard quotatives that are commonly used in colloquial speech.[18][24] They are observed in the speech of young people not only in American English, but in other varieties of English as well (e.g. be like in New Zealand English,[25] be like and go in Glasgow English[24]).[23][24] Though not semantically considered verbs of saying, they are used to convey the same meaning as such verbs. Like say, be like, go, and be all occur before the quotation:[18]

In Japanese, the quotative particle to along with the verb of saying iu (say) occur after the quotation; the conjugated form of iu (say) is itta:[18]

The quotative particle to can also occur with verbs of thinking, such as omou (think). Like to and iu (say), to and omou occur after the quotation.

As the above sentence involves a non-self quotation, à (he) and já (I) have different indices to show that they refer to different referents; only this interpretation is well-formed. The interpretation in which they share identical indices is ill-formed (i.e. ungrammatical), as indicated by the asterisk.

In addition to quotative markers, speakers also use prosodic shifts, pauses, pronominal choices, and tense to detect the occurrence and boundaries of quotations in spoken utterances.[18]

Different versions of quotative verbs, particles, and evidentials can be used to express the same idea with varying nuances, often to frame how the primary speaker, or the person who is quoting, feels about a quotation. The syntax of quotations varies cross-linguistically. A primary speaker may use the tense and linguistic idiosyncrasies of the speech at the time it was uttered in a quotation, independent from the tense in the main clause in some languages, or use the same tense in both the main clause and quotation in other languages. They will also use coreferenced pronouns to the direct quotation's first-person subject in the main clause: Shex said, "Ix..."; theyy said "wey ..." In many languages, the primary speaker may also attempt to quote an utterance in the same language the original speaker used, even if an interlocutor does not understand it; however, it is mainly context-dependent such as when telling stories.[27][28][29]

Quotative verbs are lexical verbs that indicate the speech, thoughts, or perceptions of the original speaker.[27][28]

English also displays verb-second (V2) order vestige only in quotation contexts (quotative inversion), requiring the finite verb to appear in the second position of a clause. For example: "No no no" says Harry.[29]

The newer quotative verb be like in English is used to only introduce direct quotations. Be like includes the use of the demonstrative that, which is null in most English varieties, but can be optionally overt in some varieties like Glasgow English. Dutch's quotative verb hebben zoiets van has a similar structure to Standard American English in that it has a null demonstrative that precedes the quotation. It differs from the English structures in that it uses an overt quantifier zoiets to be well-formed.[30]

Quotative or hearsay particles are grammatical markers equivalent to full lexical verbs with meanings of "say, mention, tell, etc." In many languages, they are grammaticalized to different extremes from their previously lexical form. Common patterns of grammaticalization trajectories include verb to complementizer in many African and Asian languages and verb to tense-aspect-mood markers primarily in African languages, but also in Australian languages and multiple other language families.[29][31]

Quotative Particle "-tte" and "to" in Japanese.

Quotative or hearsay evidentials provide knowledge of who or where information originated from in speech based on logical assumption. Languages indicate this in various ways: through grammatical marking, additional words and phrases, prosody, gestures, or systematic affixes of verbs. Quotative readings of evidentials are typologically rare. For example, English can express evidentials with an optional adverb, "Allegedly, Annie pulled the trigger." The interlocutor then knows the source of the quotation is from elsewhere, but this is not a quotative reading as there is no direct performative quoting or verbs of saying. Languages including Cusco Quechua, Kham, Tagalog, and Kaalallisut are documented as containing quotative evidentials. In languages with "true" quotative evidentials (which usually introduce quoted statements), it is also possible for them to occur with interrogatives and imperatives, yielding quoted interrogatives and quoted imperatives.[20][32] Similar to quotative particles, quotative evidentials are usually grammaticalized from full lexical verbs.[33]

Nhêengatú, a Tupí-Guaraní lingua franca of North-West Amazonia, has a reported evidential marker paá. An example scenario is as follows: X saw John go fishing. Mary then and asks X where John went. X replies “u-sú u-piniatika” (he went fishing). Later, Peter asks Mary where John went. She replies to Peter that she did not see John go herself, but rather heard it from a different source using the evidential marker “u-sú u-piniatika paá.” [34] 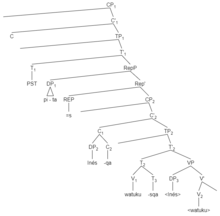 Cusco Quechua's quotative evidential comes as a derivation of a clitic, =si, for interrogative quotations.[20]