Not to be confused with Dallam County, Texas.
U.S. county in Texas

Expansion in Dallas County has blurred the geographic lines between cities and between neighboring counties.[3]

Dallas County's median household income was $56,854 and about 14.2% of the populace lived below the poverty line.

Dallas County, like all counties in Texas, is governed by a commissioners' court. This court consists of the county judge (the chairperson of the court), who is elected county-wide, and four commissioners who are elected by the voters in each of four precincts.

The Commissioners' Court is the policy-making body for the county; in addition, the county judge is the senior executive and administrative position in the county. The Commissioners' Court sets the county tax rate, adopts the budget, appoints boards and commissions, approves grants and personnel actions, and oversees the administration of county government. Each commissioner also supervises a Road and Bridge District. The Commissioners Court also approves the budget and sets the tax rate for the hospital district, which is charged with the responsibility for providing acute medical care for citizens who otherwise would not receive adequate medical services.[14]

Justices of the Peace

The Commissioners' Court meets the first and third Tuesday at the Commissioners' Courtroom located in the Dallas County Administration Building at 411 Elm St., corner of Elm and Houston streets. The building was the headquarters of the Texas School Book Depository Company until 1970. Assassin Lee Harvey Oswald shot President John F. Kennedy from a window located on the sixth floor which today houses the Sixth Floor Museum dedicated to the late president's memory.

The commissioners court has direct control over all county offices and departments not otherwise administered by a county elected official. Those departments include Dallas County Elections, Health and Human Services, Facilities Management, Parks and Open Space Program, I.T. Services, Homeland Security and Emergency Services, among others. Through their budget making powers, the commissioners exercise indirect control over the District Attorney's office, Sheriff, District Clerk, County Clerk and County Treasurer. The commissioners also set the budget for each of the District, County, and Justice courts. 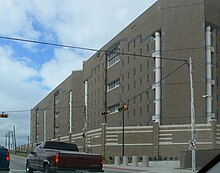 The Texas Department of Criminal Justice operates the Hutchins State Jail for men in an unincorporated area adjacent to Hutchins.[18] Corrections Corporation of America operates the Dawson Unit, a co-gender state jail in Downtown Dallas, under contract.[19]

Dallas County's post-war growth transformed it from a Democratic Solid South stronghold into a red sunbelt county that voted for the Republican presidential candidate in every election from 1952 to 2004, except when Texas native Lyndon B. Johnson successfully ran for a full term as president on the Democratic ticket in 1964. In the 2004 election, Democrats won their first countywide administrative office since 1986 by electing Lupe Valdez to the office of Dallas County Sheriff. The last Democratic countywide administrator was D. Connally elected County Surveyor prior to the office's abolition. Democrats also won three district court benches in 2004. Two years later in 2006, Democrats swept every contested countywide race including County Judge, District Clerk, County Clerk, District Attorney and County Treasurer as well as every contested judicial seat.

Starting in 1992, Dallas County began voting more Democratic than the state of Texas as a whole, with relatively narrow wins from 1992 to 2004 even as the Republican nominee won Texas easily. This trend culminated in 2008 when Barack Obama won Dallas County with a substantial margin. Obama's coattails allowed Democrats to win the remaining Republican held judicial seats. In 2012, Obama won Dallas County by virtually the same margin as he had done in 2008. In 2016, Hillary Clinton increased the Democratic margin of victory even further. She became the first Democrat to win 60% of Dallas County since Franklin D. Roosevelt in 1944, whilst under Donald Trump the Republicans failed to win 40% of the vote in the county for the first time since 1992.

The Democratic gains in the county are primarily due to the exurban migration of disproportionately conservative, Republican-voting residents to the neighboring counties of Collin, Denton and Rockwall.[21] As a result, those counties had been continuously more GOP leaning than Dallas, until diversification and continued movement of college educated whites away from the GOP has led to those counties being more competitive.[22] The tremendous growth in these neighboring counties was part of a larger explosion in exurban growth throughout the nation over the last decade which coincided with the real estate bust in 2007.[23] In North Texas, exurban growth was accelerated by transportation infrastructure expansion including the widening of U.S. 75 north and the extension of Dallas North Tollway in the mid 1990s, and the completion of the George Bush Turnpike after 2001. These and other enhancements opened up vast tracts of farmland to new housing developments.[24]

Dallas County has had three openly LGBT elected county officials: Lupe Valdez, elected Sheriff in 2004 and served until 2017; Jim Foster, elected county judge in 2006, serving one term before defeat in the Democratic primary in 2010; and Gary Fitzsimmons, elected District Clerk in 2006.[25]

State Board of Education members

White flight meant the decrease of non-Hispanic white students in Dallas County K-12 school districts from 1997 until the 2014–2015 school year. The number was 138,760 in the former and 61,538 in the latter; during 2014-2015 county charter schools had about 5,000 non-Hispanic white students. In 2016 Eric Nicholson of the Dallas Observer wrote that the bulk of white K-12 enrollment is shifting to more distant suburban areas beyond Dallas County, and that "Teasing out causation is tricky" but that the perception of poverty, which many white families wish to avoid, is tied with race.[26]

Dallas Area Rapid Transit provides bus and rail service to many cities in Dallas County, with Dallas being the largest.

NOTE: US 67 and US 77 are not signed fully along their routes in Dallas County.