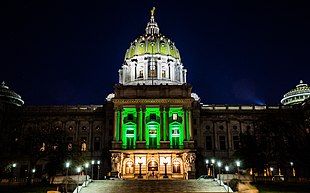 Cannabis in Pennsylvania is illegal for recreational use, but possession of small amounts is decriminalized in several of the state's largest cities. Medical use was legalized in 2016 through a bill passed by the state legislature.

On April 17, 2016, Governor Tom Wolf signed Senate Bill 3 to legalize the medical use of cannabis.[1] The bill allowed the use of cannabis with a physician's approval for treatment of 17 qualifying conditions listed in the bill.[2] It also set up a state-licensed system for the distribution of cannabis to patients, with the requirement (later eliminated in 2018)[3] that only non-smokable forms be sold.[4] A 5% tax rate was imposed on sales between growers, processors, and dispensaries.[5] No allowance for home cultivation was made.[6]

House Bill 163 was signed into law by Governor Wolf on October 24, 2018.[10] It repealed a policy known as "Smoke a joint, lose your license" under which possession of cannabis or any other illegal drug was punished with a mandatory six month driver's license suspension.[11] Under the policy, approximately 149,000 licenses were suspended for non-driving drug offenses from 2011 to 2016, according to Equal Justice Under Law, a nonprofit civil rights organization.[12] House Bill 163 was sponsored by State Representative Rick Saccone,[13] passing with only one opposing vote in the House and unanimously in the Senate.[10] 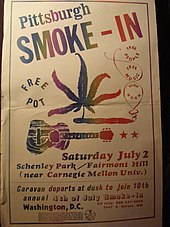 In December 2018, during a Q&A session with constituents on Twitter, Gov. Wolf tweeted: "I think it is time for Pennsylvania to take a serious and honest look at legalizing recreational marijuana."[14] One month later, Wolf announced a statewide tour by Lieutenant Governor John Fetterman to gather public input on the idea.[15] Said Wolf: "We could choose to ignore what's going on in the world and just pretend that nothing has happened, nothing has changed, or we can actually open our eyes and ears and say, 'let's go out and ask—let's find out.'"[16] The 70-stop tour (spanning all 67 counties in the state) kicked off February 11 in Harrisburg and ended May 19 in Philadelphia.[17][18]

A final report detailing the results of the listening tour was released to the public on September 25, 2019.[19] Gov. Wolf and Lt. Gov. Fetterman announced at a press conference that of the more than 10,000 people that attended the listening tour, 68% were in favor of recreational legalization and there was near unanimous support for decriminalization.[18] With the release of the report, the governor and lieutenant governor also called for three actions to be taken by the state legislature:[20]

Also at the press conference, Gov. Wolf announced for the first time his support for legalizing recreational use of cannabis.[21]

On September 3, 2020, Wolf and Fetterman held a press conference to reiterate their call for the legislature to take up a cannabis legalization bill.[22][23] Said Wolf: "Now more than ever, especially right in the middle of a pandemic, we have a desperate need for the economic boost that the legalization of cannabis could provide."[24] Fetterman added: "I would pitch this as a jobs bill as much as anything. Legalizing marijuana would create tens of thousands of jobs that require no subsidy, no kind of guidance other than to rewrite the law and allow this business to flourish in Pennsylvania."[24] Also speaking at the press conference in support of legalization was State Senator Sharif Street.[25]

On September 16, 2020, Wolf, Fetterman, and a representative from NORML held a press conference to further call for the legislature to act.[26][27] Said Wolf: "New Jersey citizens are going to vote [on a cannabis legalization referendum], and if they vote to legalize it, we will have given up the opportunity to gain the revenue that will definitely go across the border to New Jersey."[28] Fetterman added that "40 percent of our population will live within a 30-minute drive or less of legal marijuana", and that Pennsylvania should reap the economic benefits of these consumers, "not New Jersey".[28]

On October 13, 2020, Wolf held a press conference in Monroe County to make a third call for legalization in the state.[29][30] He was joined at the press conference by a local hemp farmer and State Representative Maureen Madden.[31][32]

Jurisdictions in the below table have revised their municipal ordinances to lessen penalties for cannabis offenses. Police still retain the ability to charge individuals under state law, however. In Allentown and part of Bethlehem, police officials have said they will enforce state law only per the directive of Lehigh County District Attorney Jim Martin.[33][34][35]

On January 20, 2015, Constable Ed Quiggle, Jr. of Sunbury signed the Compassionate Medical Cannabis Reform Resolution, making it official policy for the Office of Constable for the 9th Ward of the City to not enforce or cooperate in the enforcement of any acts which prohibit, penalize, or criminalize the possession, cultivation, or use of medical cannabis, hemp, cannabinoids, and other illegal or experimental drugs, becoming the first law enforcement agency in Pennsylvania, and perhaps the first in the United States, to enact such a policy.[49][50][51]