Cannabis dispensaries in the United States or marijuana dispensaries are a local government regulated physical location, typically inside a retail storefront or office building, in which a person can purchase cannabis and cannabis related items for medical or recreational use. First modeled in Amsterdam in the late 1970s where they were innocently called coffee shops, it would take the Americans more than a generation to successfully duplicate the idea of a retail cannabis storefront. Unlike the Dutch coffee shops, today dispensary customers are prevented from consuming cannabis on the site of a regulated dispensary in all known markets.

In a traditional Medical cannabis dispensary store a patient receives cannabis medication as allowed per the patient's doctor's recommendation.[1] These dispensaries sell cannabis products that have not been approved by the FDA and are not legally registered with the federal government.[2]

Washington state became the second state in the U.S. to develop a regulatory framework for marijuana dispensary operators improving the access to cannabis patients beyond the caregiver model.[5]

The term "marijuana dispensary" in the United States is most often used to refer to private organizations or companies that sell cannabis, particularly in the states of California, Colorado, Washington and Oregon. "Cannabis dispensary" is starting to become a more politically correct term as conscientious people prefer the use of the word cannabis which avoids using the more common Spanish slang word "marijuana". 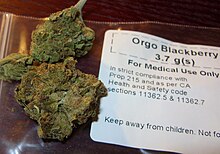 The medical dispensaries in these states buy their exit shop products (excluding medical marijuana), like child proof safety bags, and in-store storage products, from a plethora of new manufacturing companies in mainly China via importers based in the U.S.

The growing need of dispensaries to comply with various legislative laws has given birth to thousands of new products ranging from vials with child locks on them to, to pop top bottles that are childproof[8] and even childproof joint tubes.

For example, according to Title 16 C.F.R. 1700 of the Poison Prevention Packaging Act[9] in Washington, any marijuana products, whether they are edibles, concentrates, or waxes that can be consumed either by inhaling or swallowing must be sold in child resistant packaging.

Further information: Decriminalization of non-medical cannabis in the United States

Harborside Health Center, Oakland and San Jose, California describes itself as the "largest pot shop" in California[11] and was featured in a four-part reality show.[12]

An economic impact study conducted by the University of Denver examined the Colorado Harvest Company dispensary chain's contribution to tax revenue, jobs, and income to Denver and the state of Colorado.[13]

Kind for Cures was the first shop to make national press by taking over a defunct KFC.[14]

As dispensaries grow in popularity, several locating services have been created such as NearGreen, Leafbuyer, Weedmaps, Texas Weed Syndicate, Merry Jane and Leafly [16]

See also: Legal history of cannabis in the United States

Weed Wars is a four-part reality show broadcast on the Discovery Channel which highlights the Harborside Health Center in Oakland California, a medical marijuana dispensary.[17]

The third episode of the 14th season of South Park is named "Medicinal Fried Chicken" and contemplates a marijuana dispensary taking over a recently closed fast-food chicken restaurant named "KFC".