listen) BAY-ər; Spanish: Béxar, Spanish: ['bexaɾ])[1][2] is a county in the U.S. state of Texas. As of the 2010 census, the population was 1,714,773, and a 2019 estimate put the population at 2,003,554.[3] It is the 16th-most populous county in the nation and the fourth-most populated in Texas. Its county seat is San Antonio,[4] the second-most populous city in Texas and the seventh-largest city in the United States. Bexar County is included in the San Antonio–New Braunfels, TX metropolitan statistical area. Bexar County includes Government Canyon State Natural Area in the northwestern part of the county.

With a population that is 59.3% Hispanic as of 2020, it is Texas' most populous majority-Hispanic county and the third-largest nationwide.[5]

Bexar County was created on December 20, 1836, and encompassed almost the entire western portion of the Republic of Texas. This included the disputed areas of eastern New Mexico northward to Wyoming. After statehood, 128 counties were carved out of its area.

The county was named for San Antonio de Béxar, one of the 23 Mexican municipalities (administrative divisions) of Texas at the time of its independence. San Antonio de Béxar—originally Villa de San Fernando de Béxar—was the first civil government established by the Spanish in the province of Texas. Specifically, the municipality was created in 1731 when 55 Canary Islanders settled near the system of missions that had been established around the source of the San Antonio River. The new settlement was named after the Presidio San Antonio de Béjar, the Spanish military outpost that protected the missions. The presidio, located at the San Pedro Springs, was founded in 1718 and named for Viceroy Balthasar Manuel de Zúñiga y Guzmán Sotomayor y Sarmiento, second son of the Duke of Béjar (a town in Spain). The modern city of San Antonio in the U.S. state of Texas also derived its name from San Antonio de Béjar. 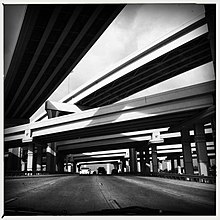 Bexar County has a comprehensive "wagon wheel" freeway system, with radial freeways and beltways that encircle Downtown San Antonio, allowing for simplified countywide freeway access, in a manner much like the freeways around Houston or Dallas. San Antonio is unique, however, in that unlike Houston or Dallas, none of these highways is currently tolled.

A Williams Institute analysis of 2010 census data found there were about 6.2 same-sex couples per 1,000 households in the county.[11]

The Bexar County jail facilities are at 200 North Comal in downtown San Antonio, operated by the Bexar County Sheriff's Office (Javier Salazar, Sheriff).[12] In late 2012, press reports noted an increase in the number of suicides at the facility. The issue was a topic of debate in the election for sheriff that year. The jail holds an average of about 3,800 prisoners in 2012, with a total capacity of 4,596, making it the fourth-largest in the state.[13][14]

The Texas Department of Criminal Justice operates the Dominguez Unit, a state jail for men, in an unincorporated section of Bexar County.[15]

School districts in the county include:

All of the county is in the service area of Alamo Community College.[16]

In 2016, for the third consecutive year, Bexar County increased the appraised value of businesses and residences. Most will hence find their property taxes will increase for the year, with higher payments for some beginning as early as November 1. The latest 7.5 percent increase in valuation follows an 11 percent rise in 2015, and a 7 percent jump in 2014. The 2016 total value for all property in the county is approximately $163 billion, or $13 billion more than in 2015. County residents express dismay to Mary Kieke, the deputy chief appraiser. "People are very upset. The tax system is absolutely broken," she said.[19]

Bexar County has generally voted for Democratic candidates in most presidential elections, though from 1932 to 2012 it was a nationwide bellwether, supporting the winner in every election except 1968. Democrats perform well within the Connally Loop, which contains heavily Hispanic neighborhoods on the south and west sides of San Antonio, and African Americans on the east side. In recent years, Democrats have made inroads on the Northwest Side toward the University of Texas at San Antonio, and the Northeast Side toward Kirby. Republicans' strength is concentrated around the military bases plus wealthier enclaves such as Alamo Heights, Terrell Hills, and the far northern section of the county.[22]